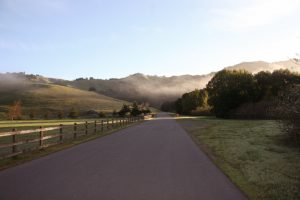 It’s 6 AM on a perfect spring morning in Northern California, and I’m riding my bike through a bank of fog that’s drifting only a few feet off the ground. It’s such a startlingly beautiful sight that I have to remind myself I’m not in the middle of some sort of crazy visual effect… and that this isn’t some sort of crazy fantasy.

But I’m not dreaming – I really am peddling down the main road inside Skywalker Ranch. I’ll admit, this is holy territory for me… I grew up wanting to be Han Solo on the even days, and Indiana Jones on the odd ones. The same genius who invented those heroes built this place, and right now, I feel like I have it all to myself.

It’s Sunday, and I’m the only one awake (unless you count the longhorn cattle grazing in the distance and the hawks riding the thermals high above). The sun is just barely creeping over the rolling hills on the horizon, and even though I’m up way too early, I’ve never felt more alive. 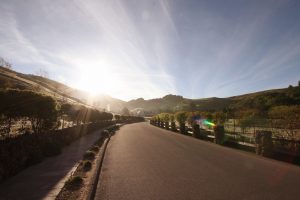 The road to the Main House.

Why? In a few hours, I’ll be standing on the greatest scoring stage ever built listening to an entire symphony orchestra play the soundtrack of ARTICLES OF WAR for the first time. Aside from keeping myself balanced (I ride way more subways than bikes these days), the one thought racing through my head is that I’m about to experience something insanely special.

You know those times when you’re anticipating an event so much that you already know it’s going to go by way too fast, no matter how much you want it to last forever? It’s not something I experience very often (I’m not that obnoxious), but I already know the scoring session for ARTICLES OF WAR is going be one of those times. 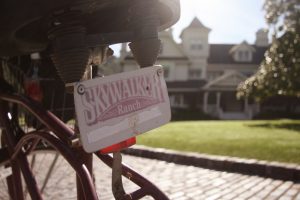 My ride, parked in front of the Main House, home of Lucasfilm.

It took me literally years to get here. And while I had the time of my life making ARTICLES OF WAR, there were a few moments (OK, maybe more than a few) when it felt like I’d never finish… but I could always remind myself that I still had the music to look forward to. I’ve loved film music since before I could walk (my parents had the original STAR WARS double LP – it’s the album my Dad used to teach me how to operate the family record player), so working on the score is by far my favorite part of post-production.

The whole process is just so mysterious and – I know I’m charging headfirst into Really Clichéd Territory here, but screw it – magical. As much as I admire music, I don’t know the first thing about creating it (when I took dance lessons before my wedding, my ever-patient fiancée had to teach me the concept of keeping to a beat… every single time we practiced). So when I hear a piece of music that perfectly supports the images I’ve created, I’m always impressed. And when the score surpasses my lofty expectations … well, aside from wanting to tell good stories (and still wishing I was Han Solo), that’s why I got into this business in the first place.

An equipment case stacked at the side of the Skywalker Scoring Stage.

Of course, the key ingredient in this whole story is “talent” – and I’m really fortunate to know an insanely talented composer named Ryan Shore. We first met back in the late ‘90s, when he scored my student thesis project, A LETTER FROM THE WESTERN FRONT. Ryan wrote and conducted a full orchestral score performed by an ad-hoc group of New York musicians, an ambitious approach that really paid off (when SISKEL & EBERT reviewed the movie, Roger Ebert said his favorite part was the music). 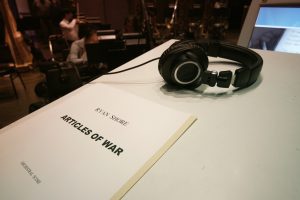 Back then, we used a small recording studio at NYU – I remember the room wasn’t big enough to accommodate all the players, so we recorded them in groups and blended everything together in the mixing room. Years later, Ryan re-recorded the entire score performed by the Prague National Orchestra – I thought it sounded amazing the first time around, but now it really kicks ass. Visit www.ryanshore.com and you’ll totally agree.

We both realized early on that ARTICLES OF WAR demanded a much more ambitious sound than our earlier collaboration. Once I finished my rough cut of the film, Ryan began writing, sending me demo cues every couple of days… and slowly but surely, the movie started to feel like a capital-M “Movie.”

We worked via the Internet – he sent me files via the Internet from his home studio in California, and then I’d sync ‘em up in my home studio in New York. We knew exactly what was needed – the score had to be just as rich as the imagery, and support (and sometimes even drive) the emotional impact of the story. Nothing beats the sound produced by a full-sized orchestra. 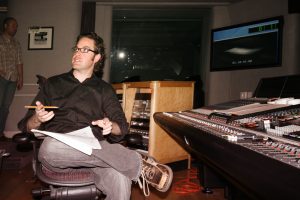 Inside the Skywalker Scoring Stage with composer Ryan Shore.

Ryan really delivered, and I couldn’t wait to hear what his beautiful demos would sound like performed live by dozens of talented musicians. In early 2008, Ryan proposed going to Skywalker Ranch. We could record the entire score in just one session, and luckily for us, the facility champions independent productions (George Lucas, of course, is famous for self-financing all of his own projects).

I knew all about the Ranch from my formative years of being a big movie nerd (and my current years of being an even bigger movie nerd). When I was a little kid, I assumed – like most kids in my neighborhood – that George Lucas actually lived at Skywalker Ranch. Of course, I eventually learned that the property actually houses Lucasfilm’s administrative offices, archive, and art department. The Ranch is also home to Skywalker Sound, a state-of-the-art post-production facility where movies go to become Capital-M “Movies.” 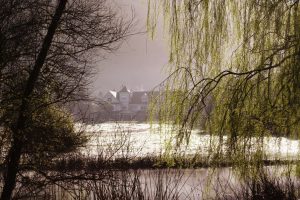 The view across Lake Ewok looking towards the Main House at Skywalker Ranch.

It’s where sound gets designed and mixed, and where scores get recorded… in other words, where movies get outfitted with a big part of their heart and soul.

Skywalker Ranch is an amazing setup, staffed with an amazing crew… and it all culminates in an amazing experience for the filmmaker. If you bring a movie to the Ranch, you get actually get to live at the Ranch, in a collection of houses dotting the property called the Skywalker Inn. Like everything at the Ranch, it manages to be perfectly designed and completely functional at the same time, while totally blending in with the scenery. I felt like I was staying at somebody’s really nice country house… which, in a way, I guess I was. 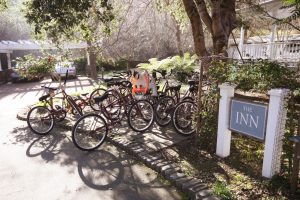 Bikes parked at the entrance of the Skywalker Inn.

For example, if you sit in a chair at the Ranch, be prepared to sit the nicest chair imaginable – and it’s the only chair you’d ever want to see placed in that particular corner (which is, let’s face it, the most impeccable corner of all time). The fact is, when the Ranch got built, somebody obviously really qualified in chairs and corners spent a long time picking out furniture and finding it the right home.

If they put that much thought into the architecture, imagine the kind of attention your film gets… 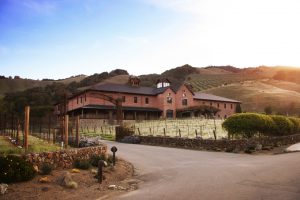 The Skywalker Scoring Stage is located inside the Technical Building, built in 1987 and art-directed to resemble a refurbished winery (there’s a great “virtual tour” of the building on the Skywalker Sound website). Aside from the Main House, this is the part of the Ranch that is most recognizable – if you own any of the recent STAR WARS films on DVD, you’ve seen (and heard, obviously) Skywalker Sound in action in the supplemental “making of” documentaries. 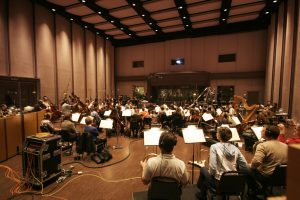 The Skywalker Symphony Orchestra tunes up for another take.

The scoring stage is vast – the first time I laid eyes on it was the night before our session. The lights were dimmed, and I could just barely make out the space through control booth window. I wandered on the stage and found the area completely prepped for the next day’s work. Microphone stands were everywhere, and resting on every podium was a copy of Ryan’s ARTICLES OF WAR sheet music. Dominating the back of the stage was a huge screen – my first time seeing the film projected would be as Ryan conducted the orchestra. Talk about a fantastic first screening… 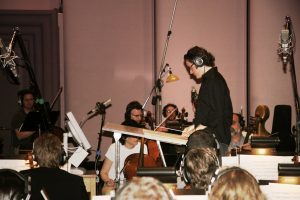 Ryan Shore at the podium inside the Skywalker Scoring Stage.

Of course, the session itself went by way too fast – we only had a few precious hours to record the entire score, with no second chances once our time was up. My memory of the session is a blur, but it was a total thrill watching Ryan tweak the score with the orchestra. They speak a musical language that makes my head spin (terms like “adagio” and “allegro” apparently have something to do with tempo, although they’ll always sound like the names of allergy medications to me). I spent most of my time on the stage, and even a few minutes on the podium next to Ryan. In all my years of going to concerts, I finally had the best seat… and it was the coolest live show of all time.

Even better, I got to share the experience with two great friends and fellow ARTICLES OF WAR collaborators, sound designer Joe Pleiman and editor Jeff Yorkes. Jeff brought along his camera to document the entire experience (he’s directing a special feature on the scoring session for the DVD, and it’s awesome). 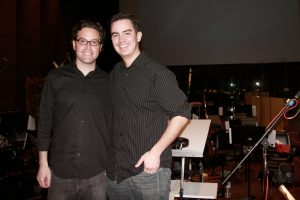 Joe is a mad scientist when it comes to audio – he takes his recorder everywhere, and didn’t waste any time gathering sounds when we got to Skywalker. While I was out riding my bike through cinematic banks of fog, Joe scoured the Ranch for cool sound effects. Now that the movie is fully mixed, I can reveal that we actually have sound from Skywalker Sound in our movie, including our rental car rolling over a rickety bridge and the air exchangers in the underground parking garage beneath the Main House. 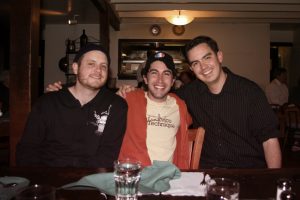 Working at Skywalker Ranch was a surreal experience, one I hope to repeat as soon as possible… but nothing will be like the first time. Hearing an original score played live is awesome enough, but when it happens at a place you’ve dreamed of working since you were a little kid… well, it bears repeating:

Yes, I am the luckiest dude on the planet.