From Script to Screen 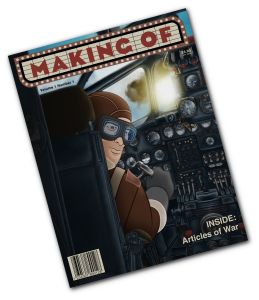 A Note From The Director

As a self-confessed film fanatic growing up in a small Midwestern town in the early 1980s, I devoured anything movie-related I could get my hands on. And before the Internet and “Special Edition” DVDs with director commentaries and even ENTERTAINMENT TONIGHT, about the only thing I could get my hands on were magazines with titles that my parents couldn’t pronounce. Publications with names like Fangoria, Cinefex and Cinefantastique.

Everybody else had subscriptions to Sports Illustrated, but I saved up my pennies for genre publications devoted to the films of my youth – the sci-fi, horror and animated epics that inspired me to make movies in the first place. I spent many rainy (and probably too many sunny) days with my nose buried in these magazines. My favorite articles were the “making of’ cover stories, the ones with lots of behind-the-scenes photographs, where effects artists, model makers, and animators would pose with their creations and spill the beans on their methods of madness. They did a great job of explaining how my favorite movies actually made it to the silver screen.

Today, it’s easier than ever to find behind-the-scenes information about the movies (Peter Jackson puts enough supplemental information on his DVDs that watching them is like getting a free class in film school with the coolest professor of all time). And if you’re interested in actually making movies, the tools are more accessible than ever. I animated all of ARTICLES OF WAR in a home studio I built from scratch, using off-the-shelf equipment and software available to the average consumer.

In the spirit of my favorite childhood magazines, here’s my own “spill the beans” article on ARTICLES OF WAR. This feature speaks in broad terms about the making of the film, which for a scrappy little independent film feels a bit like overkill (to those who’ve heard it all before, feel free to browse through the many artwork examples accompanying the story). I also want to focus on the creation of one specific shot in the film – shot #149, which shows up about 10 minutes into the movie.

ARTICLES OF WAR is filled with visuals that I couldn’t stop thinking about when I first started imagining a film set from the point of view of a B-24 bomber pilot. My best ideas usually arrive as images, and for ARTICLES OF WAR, I crafted a script to connect those images together.

I wrote my film in the New York Public Library – the famed 5th Avenue branch, with the lion sculptures in front (and, if you’ve seen the opening minutes of GHOSTBUSTERS, a seriously pissed off ghost librarian in the basement). I love my home studio, and it’s got the perfect amount of diversions to keep me sane while I animate, but writing requires a whole different level of concentration, so when it’s time to write something new, I head for the library.

I described shot #149 in the first draft of my script, dated December 23rd, 2002. Though the scene didn’t survive the various drafts that followed, I ultimately decided to restore it right before I started animation. In my final cut, the action follows closely to what I described in my first draft:

Black smoke drifts towards the heavens.

PAN DOWN to reveal the corpse of an enemy soldier, floating facedown in a brackish puddle of water.

CONTINUE PANNING across the lifeless body until we’re DRIFTING OVER the surface of the water.

MATCH ACTION as we DRIFT OVER the surface of the pilot’s letter. Jim’s familiar handwriting fills the frame…

One of the unique challenges of making shot #149 (and the rest of ARTICLES OF WAR) is how many major creative decisions I made at the beginning of the production. Because of the time and expense involved in creating animation, I only animated what I storyboarded, limiting my ability to “find” the movie in post-production (while plenty of storyboarded sequences hit the cutting room floor, there are exactly zero animated shots for me to include in the DVD’s “Deleted Scenes” section).

The creative choices I made in preproduction were decisions I just couldn’t afford to change once animation started, which really added to the pressure of creating an animatic with storyboard artist Rob Vargas and editor Jeff Yorkes. Thankfully, I found two artists who really understand animation – and since I’m pretty sure Rob and Jeff read the same issues of Cinefex that I did when I was a kid, we speak the same language. 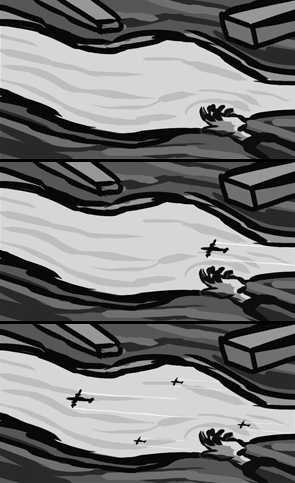 Essentially an edited version of the film using storyboards in place of animation, the animatic for ARTICLES OF WAR served as an audio and visual bible of the entire production. In addition to visualizing my screenplay, Rob contributed many original ideas for staging the action, and Jeff wasn’t afraid to offer alternate choices when something wound up not working as planned.

Just like the script, the animatic went through several drafts. After holding a few ‘test screenings,’ I wound up adding a prologue and epilogue, giving the film a completely different ending than originally conceived. Shot #149 was based on a scene that I added during this revision process. It was missing from the script Rob used to storyboard the film, but at the last minute I decided to go back to my first draft and rescue it from the cutting room floor. By this time, Rob had already wrapped his work on the film, so I drew the storyboards used to make shot #149.

Animated films generate a tremendous amount of artwork, and ARTICLES OF WAR is no exception. Warren O’Neill, a talented artist who’s worked for everyone from DreamWorks to the legendary Chuck Jones, designed and drew the characters. He brought his own unique style to the project, and embraced the limitations of the production (because I couldn’t afford full-blown, 24 frames-per-second animation, Warren was forced to convey physical action in as few drawings as possible). Telling an animator to actually draw less is never an ideal situation, but Warren always created strong poses that were a joy to animate. 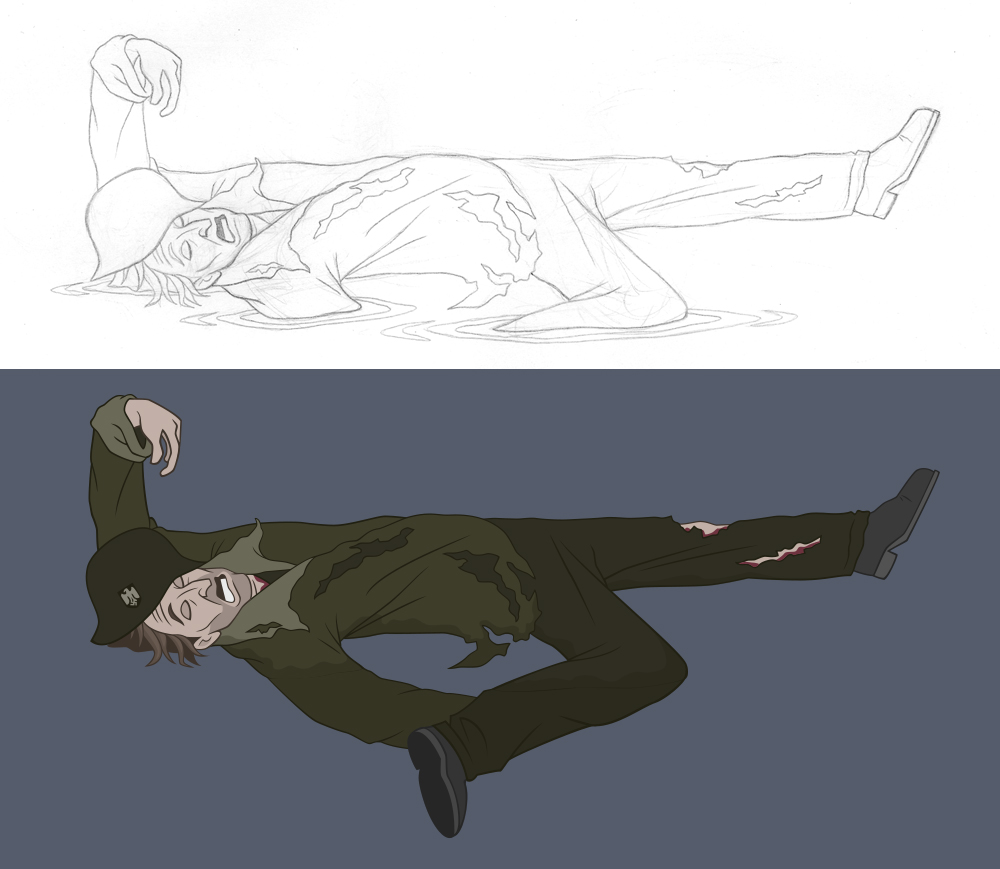 I was a painter long before I was an animator, and since it’s a muscle I rarely get to flex these days, I made the decision to paint all the backgrounds myself. In the past, I always trusted my old fashioned Windsor & Newton paintbrushes, but because of the schedule and the volume of work, I decided it was time to make the leap to using digital tools. I traded in my watercolors and drafting table for a Wacom tablet and Corel Painter, a software program that allows artists to paint in the computer using a pressure-sensitive computer pen. It all sounds like something out of TRON, and working in this new medium took some getting used to, but as soon as I discovered the “undo” command, I was hooked.

The primary artwork for shot #149 is a character designed and drawn by Warren composited into one of my background paintings. I painted the background first, imagining a shattered wasteland. 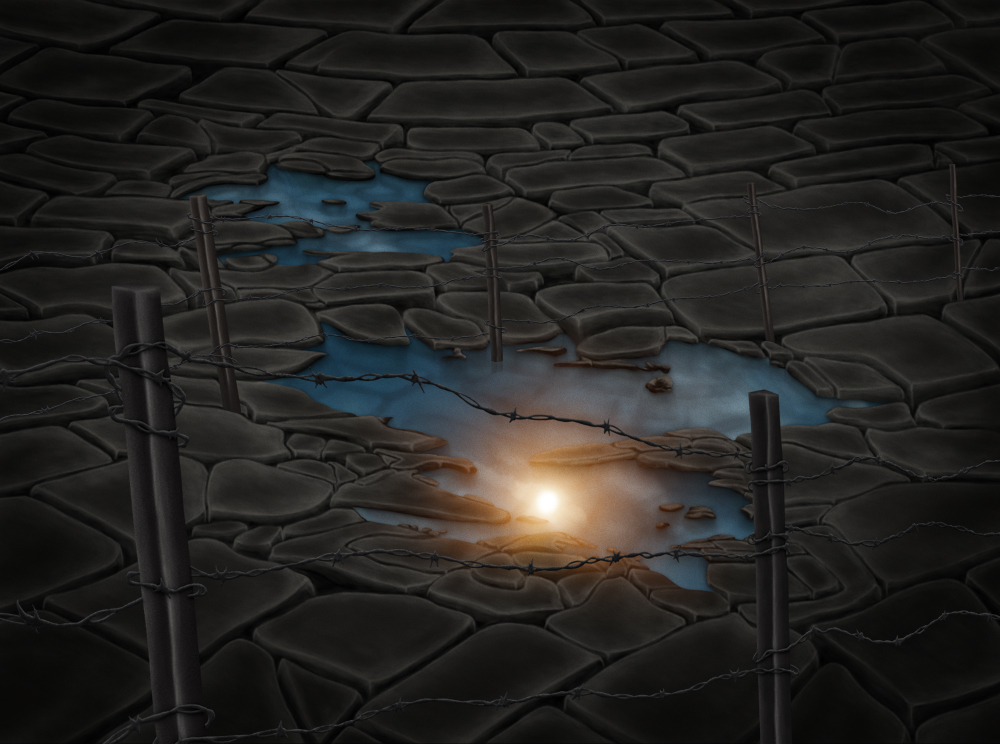 For inspiration, I just had to go for a walk (I don’t live anywhere near a shattered wasteland, but the look of the uneven cobblestone streets of my Greenwich Village neighborhood were just what I wanted for this scene). Warren tailored his pose of the dead German soldier to my painting, drawing a battered corpse slumped in a puddle of water. 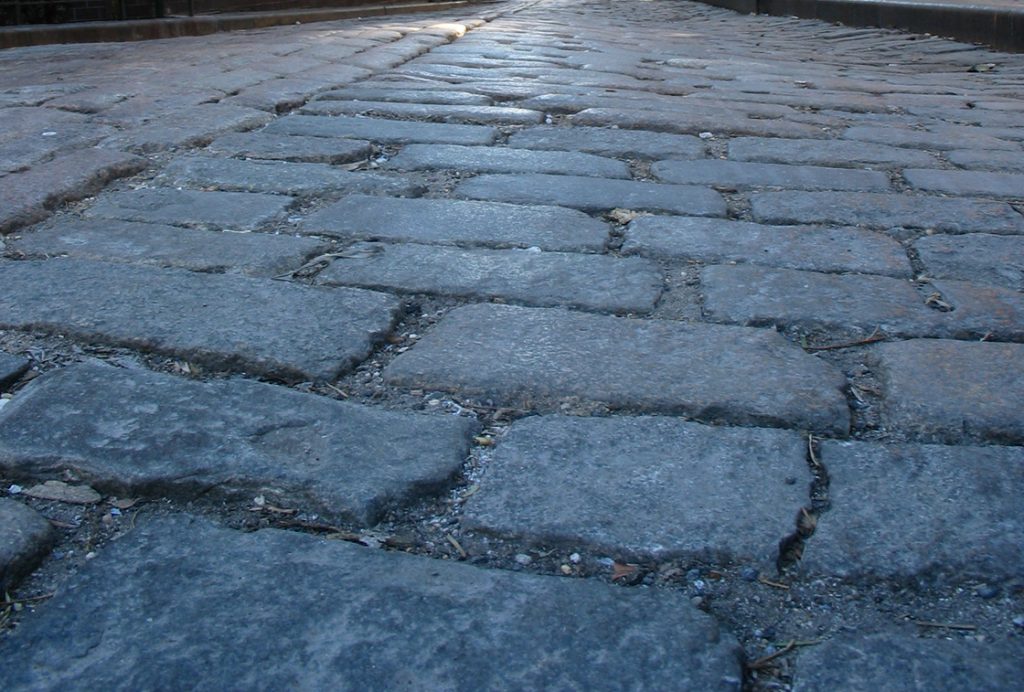 Reference photo of the cobblestone streets outside my Greenwich Village studio.

The animation in ARTICLES OF WAR owes a great debt to the brilliant work of a Disney animator and engineer I’ve long admired, the legendary Ub Iwerks. He helped invent the groundbreaking ‘multiplane’ camera system used in all of the traditionally animated Disney classics, a system of shooting through multiple moving background paintings to give the illusion of three-dimensional depth. 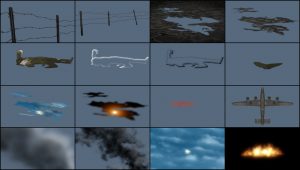 A collection of individual elements used in Shot #149.

I always loved the sense of movement and rich depth of field found in the best multiplane camera setups – when they’re done right, you really do feel like you’re traveling through a painting. Creating shots with multiple layers set at different “depths” felt like the perfect fit for ARTICLES OF WAR, a movie filled with demanding camera moves and ambitious action. Considering one of the ‘stars’ of the movie was a B-24 bomber, I pushed for shots that would not only sell the speed of powered flight, but also showcase the scale and depth of the environment, from vast Allied airfields to the sun-drenched skies found in a pilot’s point-of-view. I wanted a true sense of depth and an ability to move forward and backwards through the different two-dimensional layers of artwork.

Of course, I don’t own a multiplane camera – I remember seeing one on display down at Disney World, and I doubt it’d even fit through the front door of my studio. The Mouse House traded in their traditional film cameras for a digital ink-and-paint/compositing system way back in the late Eighties, and although I shot my first few films under an Oxberry animation camera, I’ve been making movies using computers for over a decade.

I animated ARTICLES OF WAR using Adobe AfterEffects, a software package that let me to manipulate and composite together many individual layers of artwork. Wikipedia describes the software as “Photoshop for video” – it was originally developed for broadcast design and motion graphics – but animators and visual effects artists have been using it as a relatively inexpensive digital camera stand and compositing tool for years. 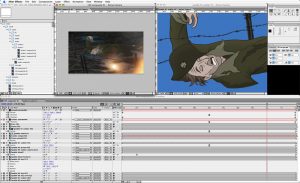 A screen shot of the Adobe AfterEffects project file for Shot 149.

I used AfterEffects to animate shot #149 by setting keyframes that controlled the position, scale and rotation of dozens of different layers, simulating the sweeping camera move described in my script. I also added a variety of effects, from the smoke and fire in the foreground frame to the rippled surface of the water that reflects the belly of a B-24.

For another look into my animation process, here’s a 1 minute video feature I originally created as a “special feature” for the film’s DVD release. This shot progression highlights each individual piece of artwork seen in Shot #42:

Sound designer Joe Pleiman and composer Ryan Shore both worked miracles for me on a previous production, A LETTER FROM THE WESTERN FRONT, which won a Gold Medal for animation at the Student Academy Awards. Both are back for ARTICLES OF WAR, and they’ve spent months creating an amazing soundtrack for this new film.

Joe created a library of original sound effects and Ryan wrote an original orchestral score to support the visuals (for an in-depth look into the music, check out the article I wrote about our experience recording at Skywalker Ranch).

I’ve rendered the animation as a high definition digital file, which a film lab will use to make 35 MM prints for exhibition.

I’ve always known that no matter what, ARTICLES OF WAR was always going to be two things:

I chose to make ARTICLES OF WAR an animated film because even though it’s not the most obvious choice, I believe animation is a unique medium capable of telling a wide variety of stories… even historical dramas set during the Second World War. For an independent production armed with big visuals and a small budget, animation was the only way I could affordably realize the images that, once stuck in my head, I absolutely had to see on the big screen.