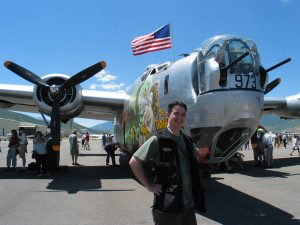 Filmmaker Daniel M. Kanemoto preparing to fly on the B-24 Liberator.

It’s the summer of 2003 and I’m crouched inside the cramped metal belly of an American warbird built over sixty years ago. Even though it’s the middle of July, my teeth are rattling – not from the temperature, but from the vibration produced by four supercharged Pratt & Whitney R1830 engines, roaring mechanized beasts of iron and oil and God knows what else that’s keeping this 45,000 pound monster aloft.

The wind whips across my face – there’s no glass in the window I’m hunkered next to, just a 50-caliber machine gun (it doesn’t work, but I’m still afraid of it). I’ve got a fantastic birds eye view of a multimillion-dollar ski resort (we’re doing circles above the Wasatch mountain range in Utah, home to “The Best Snow On Earth”).

Welcome aboard the only restored and operational B-24 bomber in the entire world.

Once the most produced Allied aircraft of all time (by 1943, American factories were churning ‘em out at the rate of one an hour on the largest assembly line on Earth), today there are only a handful of B-24s left. Most of them are grounded, sitting in museums, their flying days a distant memory of the past. But the Collings Foundation, a nonprofit group dedicated to the restoration and operation of historic aircraft, maintains their B-24 as a “living artifact.” Every year, crews from the Foundation fly the warbird to air shows across the country, offering the public a unique opportunity to pay tribute to those who served and sacrificed during the Second World War.

The efforts of the Collings Foundation have really paid off. I love museums, and I’ve visited every military exhibit in every city I’ve ever been in, but short of interviewing actual veterans, I’ve never felt closer to the history of World War II than while flying on their fully restored B-24.

It’s a feeling I’m trying to capture with my film ARTICLES OF WAR, an animated story about a B-24 pilot writing home to his father. It’s a film I’ve wanted make for years, and the reason I climbed onboard a fully operational warbird in the first place. Or perhaps it’s the other way around – maybe I’ve always wanted to feel what it’s like to fly on a B-24, and making this film is the perfect excuse… either way, it’s an experience I’ll never forget.

The world’s only fully restored and operational B-24 on the runway in Heber City, Utah.

I’ve admired B-24 bombers since I was a little kid, long before I discovered the significant role the aircraft played in the Allied victory of World War II. The B-24 is often overshadowed by the always-popular B-17 “Flying Fortress,” but although I admire the B-17, I’m a complete freak for the B-24. In this humble artist’s opinion, it’s just one of the coolest airplane of all time (I suppose I’m a sucker for the unique twin tail and rudder assembly that gives the B-24 such a distinctive profile).

So even before I wrote the script for ARTICLES OF WAR, I was in love with “THE PLANE” (I always referred to it in my notes as “THE PLANE,” in ALL CAPS, because it’s that important – I hate sounding so dramatic, but if I couldn’t create a convincing B-24, then my movie was doomed to failure). 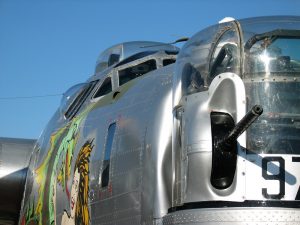 The B-24’s distinctive nosegun and cockpit.

My home studio was soon overflowing with B-24 research. I started by collecting photographic reference of THE PLANE in books and magazine articles, and once I ran out of photos I hired a talented artist to build a couple of small models for me to study (in addition to building the planes, he also constructed the ingenious boxes they arrived in, which miraculously saved the fragile plastic replicas from the notoriously abusive New York City postal system).

Once I figured out what the B-24 looked like from the outside, I took advantage of Google, the greatest research tool of all time, to see what I could learn about their insides. I think I followed every link Google spit out – it turns out there are a lot of people on the World Wide Web who have turned loving the B-24 into a career, which is how I found the Collings Foundation and their one-of-a-kind flying museum.

The Collings Foundation turned out to be an indispensable resource, because even the best books and websites (and I found some really great ones) weren’t enough to satisfy the unique needs of my animated production. Despite all of my detective work, I could never get a feel for what it felt like to actually be inside a B-24. Most of ARTICLES OF WAR takes place from the point of view of a B-24 pilot behind the controls of his ship. Since I’d be animating the movie from scratch, using drawings of the characters composited against backgrounds painted by Yours Truly, I needed to gather as much photographic reference as possible. I needed to see for myself the pilot’s point of view… and that meant finding a way to climb inside the cockpit of a real B-24.

Which brings me back to Utah. I discovered the Collings Foundation’s “Wings Of Freedom” tour would be making a stop at a small airshow in Heber City, which is coincidentally the summer home of my favorite aunt and uncle (I visit as often as possible, especially in the winter – Utah really does have the best snow on Earth, and it turns out the summers are awfully beautiful, too). My family welcomed me with open arms, and since Heber City is as small as small towns get, I knew the B-24 wouldn’t be too crowded when it was open to the public.

I’d have lots and lots of face time with my favorite airplane.

I arrived on the day of my flight extra early, eager to photograph every inch of the THE PLANE (I even wore a professional-looking photojournalist jacket, just to get into character). The Collings Foundation staff proved to be very patient with the overeager, highly-caffeinated filmmaker that showed up to document every inch of their vintage aircraft. I was allowed inside the normally off-limits cockpit to capture my coveted “pilot’s point of view,” and I crawled all over plane, clicking away with my digital camera. 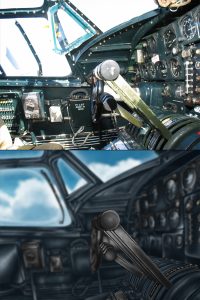 A background painting inspired by a photo taken inside the cockpit of the B-24.

I found angles that were impossible to see with my study models, and the interior was completely different than what I imagined. Control lines ran across the interior fuselage – I was warned not to touch them. The front landing gear retracted into the nose of the ship – another thing to stay away from in flight, since the wheel spins so fast after takeoff that it can easily rip off your hand if you accidentally get snagged.

But nothing compares to the warning I got right before my flight took off – the pilot cautioned me not to step off the thin elevated catwalk spanning the bomb bay. The doors, he stressed, were engineered to break away if a bomb ever got loose, so if you put pressure on them, you might crash through the doors and wind up becoming a HUMAN bomb.

For the record, yes, my eyes have never been wider than after hearing this critical warning.

I’ve been in faster planes – I have no doubt the JetBlue airliner that got me from New York to Utah is a bazillion times more powerful than the B-24 – but my Collings Foundation flight was the fastest, most memorable thirty minutes of my life. Hurling through the air with the roar of the engines rattling my eardrums, it’s just impossible not to imagine what it felt like to fly on a B-24 during the war. I visualized myself cocooned in a flight suit, breathing bottled oxygen in a freezing, unpressurized cabin, sitting next to a bomb bay filled with 500 pound explosives, with nothing but a thin sheet of unarmored metal between myself and an exploding German artillery shell.

I have nothing but respect for the veterans who sacrificed so much to fly these warbirds, which I’ve come to think of as so much more than just a “cool” airplane.

The flight was the perfect way to begin production on a film centered on the efforts of a B-24 pilot fighting in the war. While I remain eternally grateful that I’ve never experienced a single second of combat, I did get a small taste of what it means to fly on a B-24. I left with hundreds of photos, and even though I had to navigate the bomb bay catwalk a couple of times, I thankfully avoided becoming a human bomb. 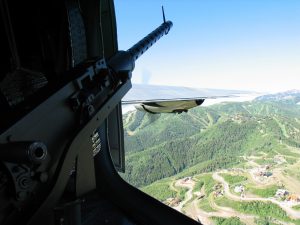 Flying over Utah in the belly of a B-24 Liberator.

These research photographs proved to be indispensable in the making of ARTICLES OF WAR. Interacting with an actual B-24 and personally witnessing its power transformed my direction of the film. Even though I created the movie using drawings and paintings, the Collings Foundation gave me an opportunity to base my artwork on something tangible and real… a warbird that gave me the ride of my life through the mountains of Utah.

In 2005, the Collings Foundation’s B-24 received a new paint job and name – it’s now known as “Witchcraft,” in honor of a legendary 8th Air Force plane that flew over 130 missions in Europe. Visit the Collings Foundation on the web at www.collingsfoundation.org and check to see if their incredible aircraft collection, including the “Witchcraft,” is coming to a city near you!