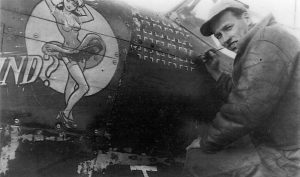 Don Allen paints of the 15 victories credited to Lt. Nicholas “Cowboy” Megura on the “Ill Wind?”, a P-51 Mustang in the 334th Fighter Squadron.

For as long as I can remember, I’ve always loved “nose art” – those one-of-a-kind, unmistakable emblems that air crews started painting on the sides of their planes in World War II. When I was ten years old and deep into my “model airplane” phase, I’d wander up and down the aisles of the hobby store and pick the box with the best looking painting – and the best paintings always featured nose art. Even though my finished models always had a droopy, slightly crash-landed look about them (I’m horrible at gluing things together, unless my own fingers count, in which case I’m an expert), I could always salvage the nose art (usually in the form of a sticker, which I’d paste on whatever notebook I was using in elementary school that year).

So even before I started researching ARTICLES OF WAR, I was building a collection of nose art from the 1940s. These historical artifacts would serve as my inspiration when it came time to create an original symbol for the fictional plane of my film, the “Dakota Zephyr.” This would be an important piece of artwork, a visual cue for my audience to immediately identify the “hero” aircraft from the rest of the squadron.

I always planned to create a brand new piece of nose art for the Dakota Zephyr, but that changed the instant I laid eyes on the incredible paintings of Don Allen. I first read about this legendary nose art designer in an article on www.historicwings.com, where I learned that an entire gallery of his work is featured at the Air Mobility Command Museum in Dover, Delaware. Mr. Allen re-created all of his original nose art designs for the museum (the originals, of course, were destroyed when the planes that survived the war got scrapped in the years following V-Day). 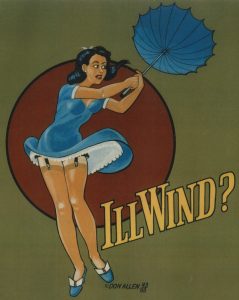 Mr. Allen’s work is, in this humble artist’s opinion, simply the best – vivid, original, and amazingly well rendered. I find it hard enough to paint using my computer, where every mistake can be magically “undone” with the click of a mouse, but Mr. Allen created his work against an unforgiving metal fuselage, using paint scrounged from limited supplies in wartime England.

Mr. Allen’s nose art paintings are the work of a confident artist, and when I saw his collection of beauties at the AMC museum, it was love at first sight.

My personal favorite of Mr. Allen’s wartime creations is his nose art for “Ill Wind?,” a P-51 Mustang flown by Nicholas “Cowboy” Megura. The timeless design is simple and sexy… a beautiful girl swept up in a breeze, barely able to hold onto an umbrella that’s about to take flight. Back in 1944, that breeze was obviously the “Ill Wind”… but when I saw it, I immediately imagined it was the “Dakota Zephyr” sweeping the lady off her feet.

I held onto this concept throughout pre-production and just couldn’t let it go. Every time I tried creating an original design of my own, it wound up looking like a pale imitation of Mr. Allen’s original work. So in the end, I used Mr. Allen’s “Ill Wind?” emblem as the nose art for the Dakota Zephyr. I switched a few colors around, but overall, it’s a faithful reproduction of the original.

Thankfully, Mr. Allen – now a retired commercial artist living in Ohio – recently viewed a rough cut of the film and approved the use of his artwork in my production. He sent me an amazing handwritten letter, describing his wartime experience:

The 33 months I spent in WWII England as a commercial artist remade into an air mechanic/nose artist/left waist gunner was certainly a life changing experience. The keyword is “life” – there were incidents during my wartime service that could have been disastrous, but Lady Luck was sure on my side.

My 4th Fighter Group was the highest scoring in victories in the whole 8th Air Force – but it came at great cost – 128 of our pilots died in combat – the “unlucky” ones… Every one of those 128 had grave misgivings each time they strapped themselves into that small cockpit. They somehow made themselves believe it was going to be the other guy that got “it.” 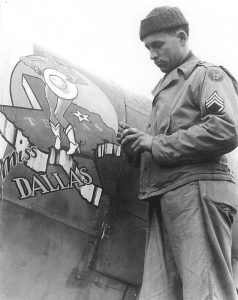 Nose artist Don Allen at work on the “Miss Dallas”.

It was a huge thrill to communicate with Mr. Allen, a veteran and artist who generously offered his advice and approval of my film. Actually speaking to the artist behind some of the most iconic nose art in World War II history will always rank as a huge highlight of making ARTICLES OF WAR. In fact, Mr. Allen told me his designs have even been featured on model airplanes. If I ever have a kid that goes through the same “phase” I did, you can bet the first thing we build will be a P-51 Mustang with “Ill Wind?” proudly displayed on the nose!

Visit the Air Mobility Command Museum in Dover, Delaware to view Don Allen’s hand painted recreations of his iconic nose art designs from World War II. Special thanks to director Michael D. Leister of the AMC Museum and the National Museum of the United States Air Force at Wright Patterson Air Force Base in Dayton, Ohio for their generous time and assistance. 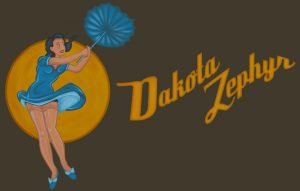 The “Dakota Zephyr” nose art, based on “Ill Wind?” created by Don Allen.